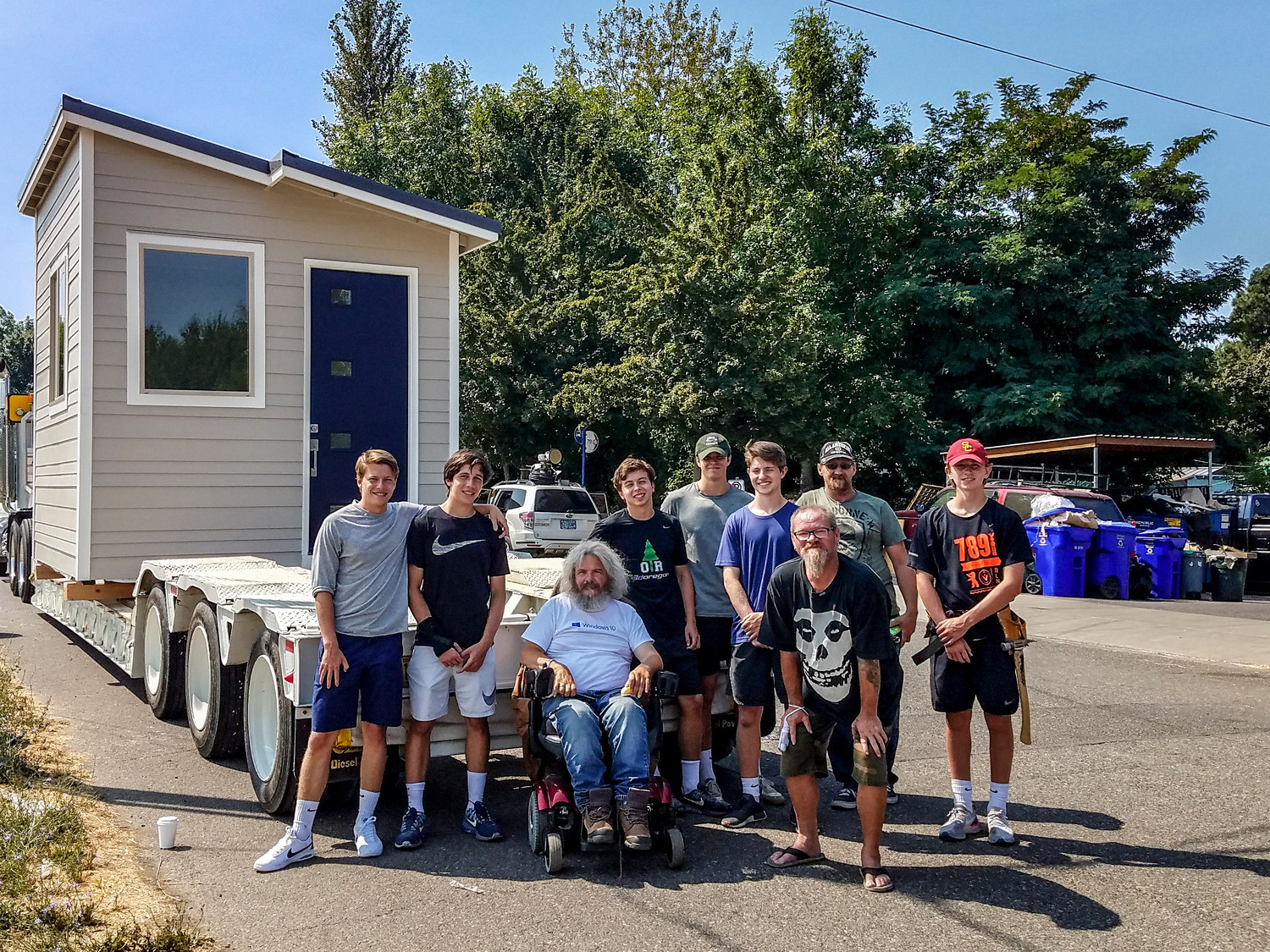 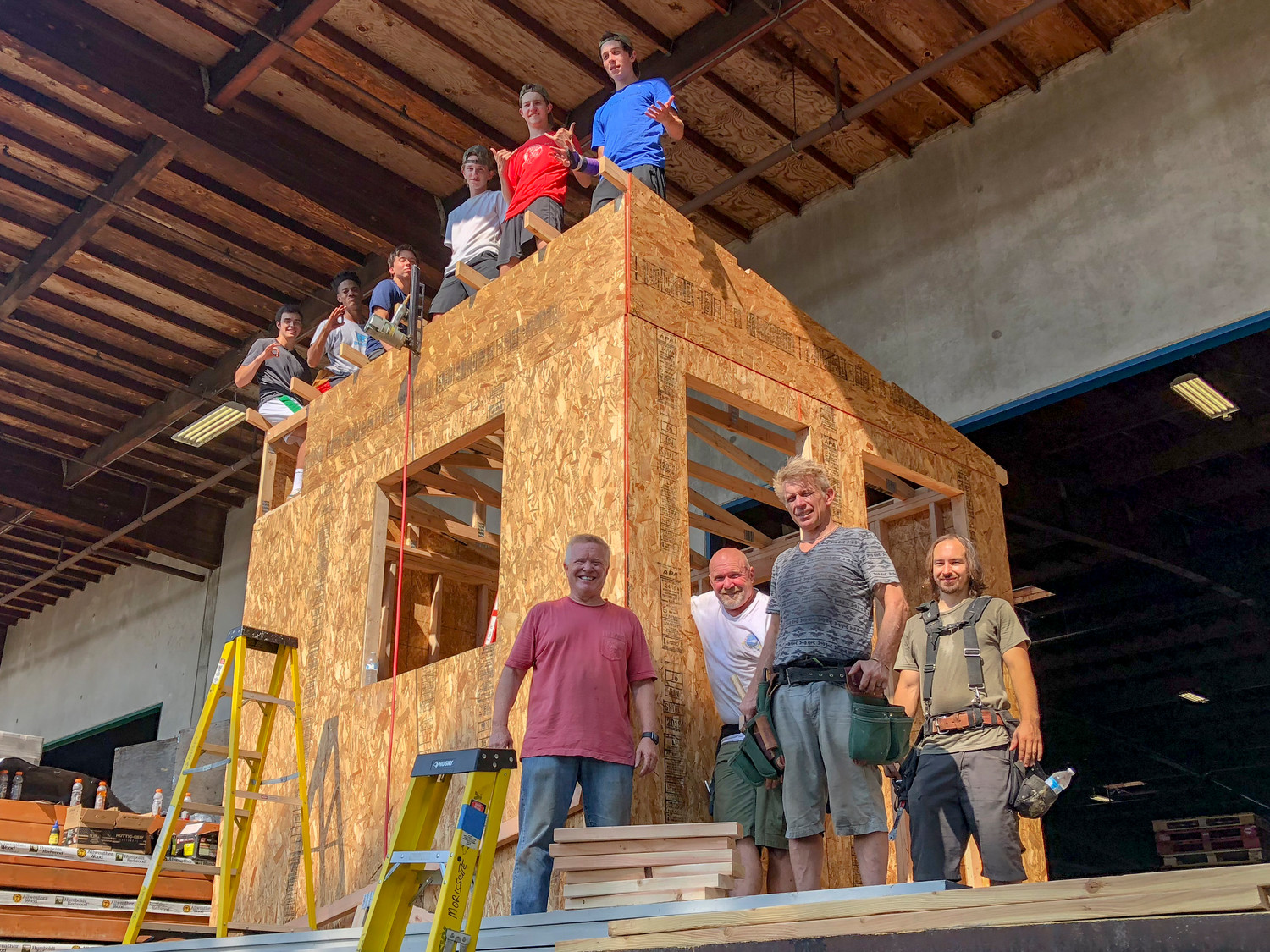 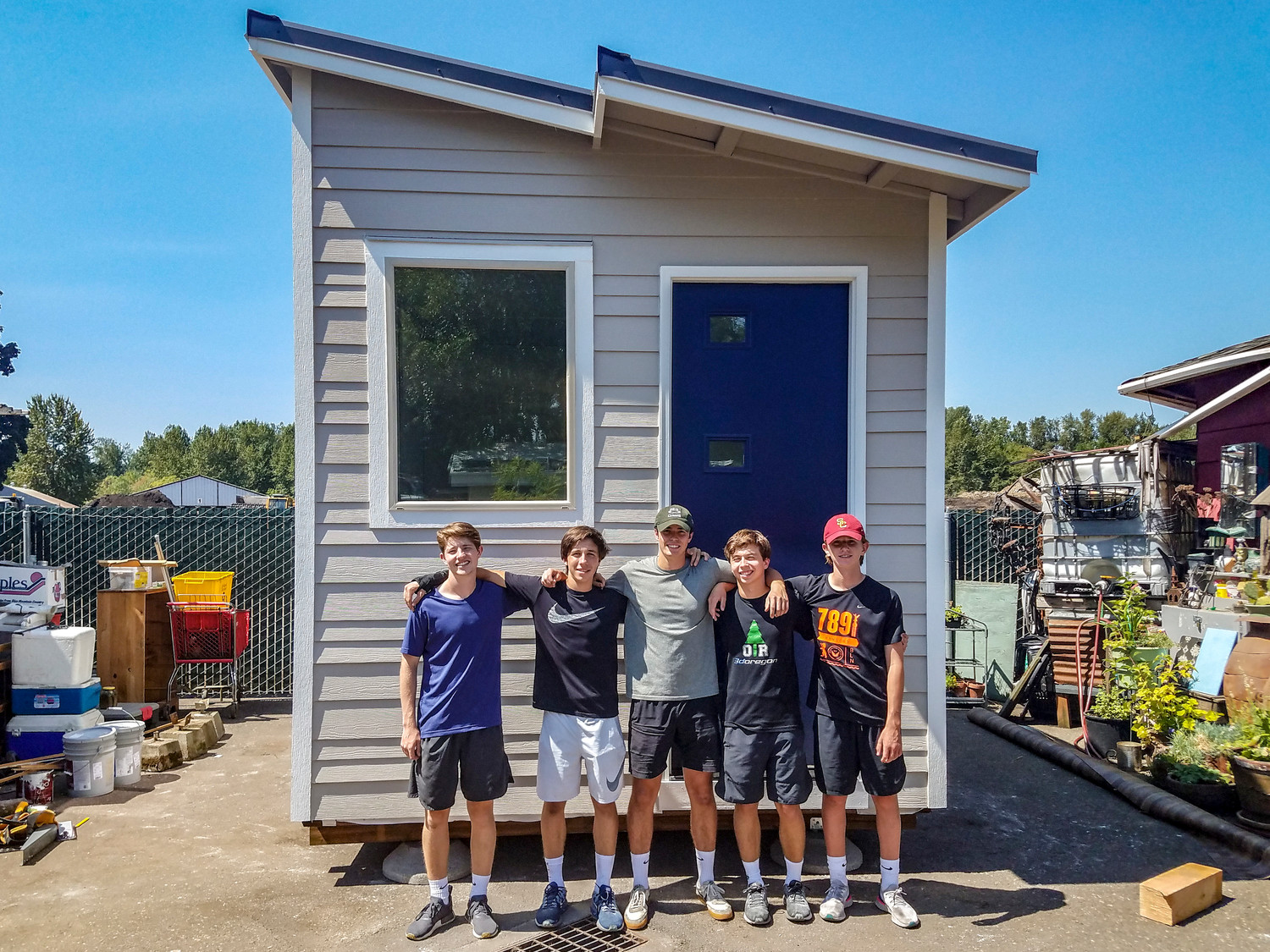 PORTLAND — Sometimes in life, it’s the little things that matter most. A kind word, a small gesture or a gentle push in the right direction can make all the difference for a person struggling to take that big first step toward a better life.

It’s a lesson that brothers Jack and Luke Morissette learned early on as students at Oregon Episcopal School (OES), and it’s become part of their family legacy.

The Morissette brothers recently led a group of fellow students from the OES upper school in an effort to build and deliver a tiny house to benefit a resident at Dignity Village, a city-authorized encampment of some 60 residents which began as a tent city for some of Portland's homeless.

With dedicated land near Portland International Airport since 2000, Dignity Village has grown to offer small brick-and-mortar homes as well as support to help residents transition to permanent housing and employment

After leading a team of fellow student volunteers in the building of the tiny house, the Morissette brothers were on hand at Dignity Village when the 120-square-foot structure arrived ready for occupancy on Friday, Aug. 10.

“It’s amazing to see the house in place and see how happy folks out here are to have it,” said Jack Morissette, an 18-year-old heading into his senior year at OES.

Two years ago, Jack Morissette worked with his older brother Henry to build and deliver a tiny house to Dignity Village. The new tiny house sits adjacent to the one Jack and Henry built, and just across the way for another built by their older brother Ted four years ago.

This year, 16-year-old brother Luke is in on the act.

“It’s just a really good cause, and it feels good to be doing something like this with my time,” said Luke Morissette, who will be sophomore at OES this fall. “It’s a fun thing to do with my brother and follow this legacy we have in our family.”

“I think it’s awesome,” said Dave McGee, an 11-year resident at Dignity Village who helped with the delivery of the new tiny house. “A lot of people don’t want to be around homeless people, but these teenagers help build these houses, help us put them in, they show us respect and give us some dignity. That’s why it’s called Dignity Village.”

McGee knows all about the difference having a roof over your head can make. He’s seen the ugly and dangerous side of homelessness, but also the value of a community that he’s helped shape at Dignity Village.

“We don’t have much room for anything but tiny houses out here, but they mean the world to us,” he said. “When you are on the streets, you have to take everything you own with you everywhere you go. You have nowhere to leave your stuff, nowhere to lock it up, nowhere where it’s safe.

“You move out here, and you have a house. It’s a little teeny one, but it’s a house. It’s better than a tent under a bridge where somebody comes and steals your stuff. You know how many times I’ve had all my bedding stolen because I’ve tried to hide it and somebody finds it and takes it? Gone.

“This gives people a place where they can feel like they’re home.”

Community service is an important part of the enriched academic experience at OES, an independent school in Southwest Portland for grades Pre-K through 12. Students in the upper school (or high school) do about 160 service hours over their four years, broken down to 60 hours on campus, 20 in the community, and two substantial projects that they develop on their own.

Jack Morissette has made the plight of the homeless the focus of his community service requirement and other studies. Last school year, he completed a literary-journalism project about Dignity Village.

“I spent some time here talking with the people and helping them, so I’ve been here a few times already this year,” he said. “I focused on how the residents have come together as a community and how hard-working they are. Yes, they are homeless but a lot of them have been very unlucky at different points in their lives and with The Village they’ve overcome a lot of obstacles and come together as a community.”

With the help of fellow students and advice and materials from professionals at Pacific Lumber & Truss Company in Beaverton and Lake Oswego-based Stone Bridge Homes NW, the Morissette brothers completed the new tiny house in about four days.

The home was placed on the back of a flat-bed semi tractor trailer and moved from the building site on a loading dock at Pacific Lumber to Dignity Village, where professionals placed it carefully and permanently.

Outfitted with terrific details including a custom front door and cleverly varied siding, the home will make a cozy residence for a deserving community member.

“It was fun to hang out with my friends and build a house,” Luke Morissette said. “And it’s super rewarding to see it here in this place where people who don’t have much come together and create something for their community.”


Daily News Where you Live