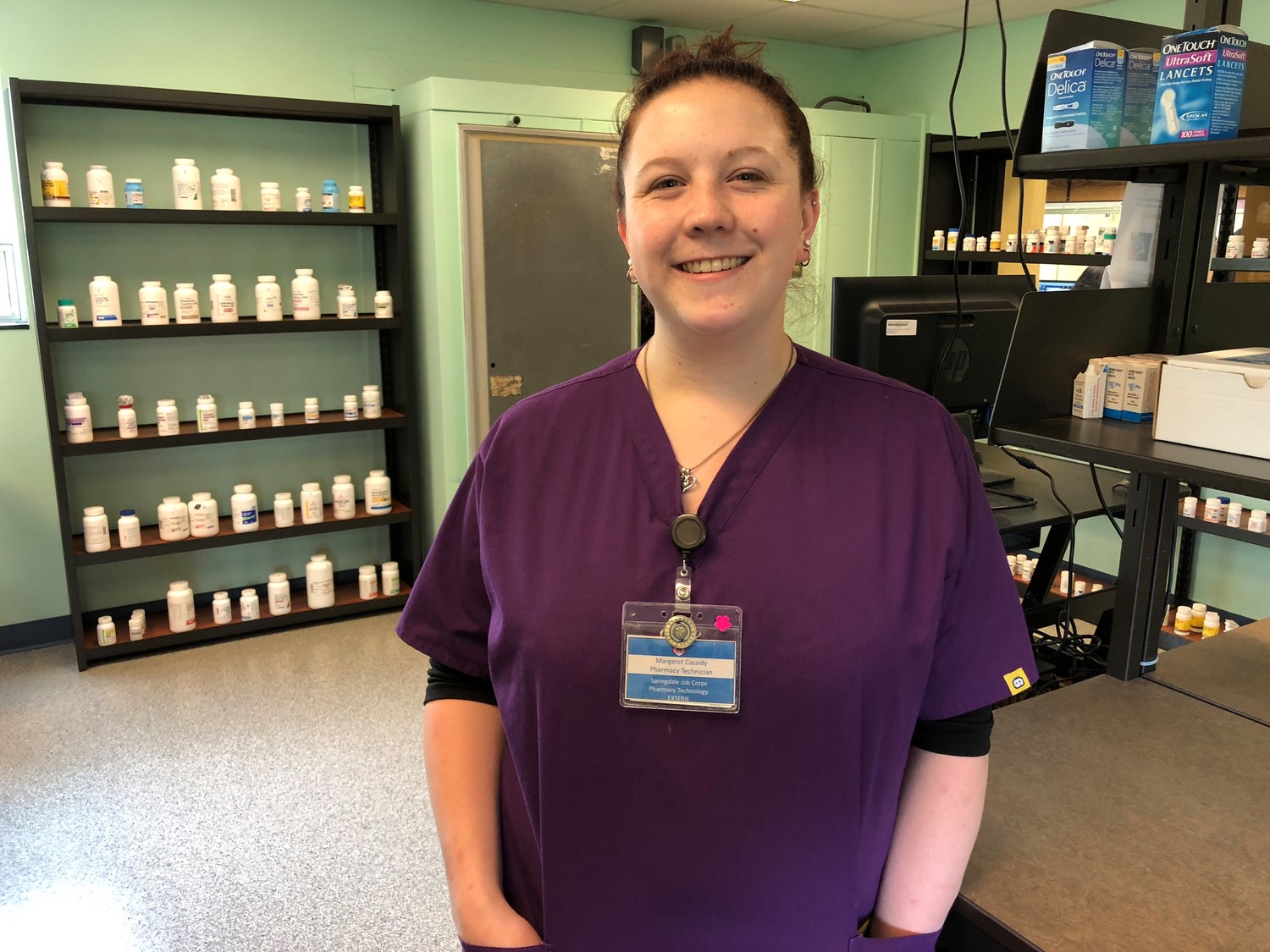 The journey to Springdale Job Corps Center had a few detours for Pharmacy Technician student Maggie Cassidy. As high school graduation approached, Cassidy didn’t know what she wanted to do for a career. She was working full-time, but wasn’t too happy with her situation. Her family suggested joining the military. Reluctantly, Cassidy enlisted, but due to a medical reason she was not allowed to stay. She thought a location change would help her job prospects and went to live with her grandparents.

It didn’t. There weren’t many jobs in her new environment. Eventually, she was able to find work at a coffee shop, but knew it was something she couldn’t do long-term. She was really struggling. Cassidy’s grandpa stepped in and suggested Job Corps. She was hesitant of enrolling at first, but the more she worked with her admissions counselor, the better Job Corps started to sound. “I was making minimum wage and I was looking for a career, not just a job,” Cassidy said. She was Springdale bound.

During Career Preparation, Cassidy was still unsure about which training program she wanted to pursue until her trade visit to the Pharmacy Technician lab. “Health Occupations was actually my first choice, but when I talked to Tammi [Morris, Pharmacy Technician Instructor] I saw how I could fit into the program,” Cassidy said. “I was nervous at first because of the math, but Tammi promised to help me and be an active teacher.” The program wasn’t always easy for Cassidy. There were days filled with laughter and days filled with tears. “I learned to be patient and to be easy going. Things aren’t always going to go my way and I have to be able to adapt the situations,” Cassidy said. There were also days where she thought quitting might be easier. “I kept going though, because I didn’t want to go back to California. I made it this far and I wanted to push through it,” Cassidy said.

Cassidy has been at Springdale for just over one year. She’s in the process of wrapping up her Work-Based Learning at a local Walgreens Pharmacy. Cassidy is proud of the progress she’s made during her busy externship. “Day one was so scary. I felt like I was going to mess up the entire day,” Cassidy said. Now, she feels like she has the hang of it, but knows she has a lot of learning ahead of her. Once her externship is complete, she will work full-time at the Kroger Mail Order Pharmacy.

Springdale has also helped Cassidy feel good about who she is. “I used to not see myself as a very strong person. But I’ve realized I am strong and capable of accomplishing my goals,” Cassidy said. Springdale has been a wonderful experience for me and I will never forget this place.” Cassidy will start her full-time job April 23.

Springdale Job Corps Center is one of 125 Job Corps centers across the country offering career and technical training to young adults age 16-24. Students obtain job skills, career success skills, and have the opportunity to live either on or off campus.